What is Diabetes and Its Innovative Treatment Approaches?

Innovative approaches about diabetes consider it as a syndrome that combines the symptoms of 2 different diseases: type 1 diabetes and type 2 diabetes. 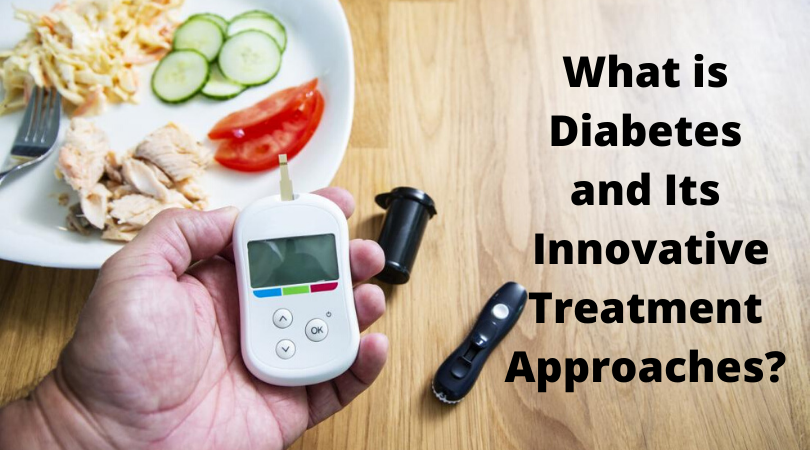 Type 1 diabetes affects the entire body metabolism. Acetone increases the load on the kidneys and gradually destroys them. Some proteins, including antibodies, cease to be synthesized, due to which immunity is significantly reduced. There observed increased cholesterol synthesis.

A person is very thin and weak due to lack of energy. The lack of insulin has to be constantly compensated by injections of special drugs, without which a person can die.

The remaining 85–90 % may suffer from the type 2 diabetes, or non-insulin-dependent diabetes. With the diagnosis of type II diabetes, the pancreas first works as it should.

In this disease, muscle tissue, for which glucose is the main energy supplier, is not able to use the insulin produced by the body. Almost all body cells cease to receive vital glucose.

But most often, type 2 diabetes is found in people with excessive weight. According to statistics, among non-insulin-dependent diabetics, over 80 % are overweight. In order to control your weight, our experts advise you to record everything that you ate during the day. This helps to analyze nutrition and identify imbalances.

A common diabetes treatment for all patients involves lifestyle changes, including diet and exercise. Regular monitoring of blood glucose levels is essential to prevent diabetes complications.

Patients with type 1 diabetes are treated with insulin, and they are also prescribed a diet and physical exercise.

Type 2 diabetes patients are often initially treated with diet and exercise. If these measures are not sufficient for glycemic control, patients may be given oral antihyperglycemic drugs, an injection agonist of the glucagon-like peptide-1 receptor (GLP-1), insulin, or a combination of these drugs.

An insulin analog in type 1 diabetes should ideally imitate the function of beta cells using 2 types of insulin to ensure basal and prandial needs (physiological replacement); this approach requires close attention to diet and exercise, as well as the time of administration and doses of insulin.

When insulin is needed in patients with type 2 diabetes, glycemic control can often be achieved with basal insulin in combination with non-insulin antihyperglycemic drugs, although some patients may need prandial insulin.

Currently, most insulin preparations are based on recombinant human insulin, which virtually eliminates frequent allergic reactions to a drug derived from raw animal material in the past. A number of analogs are available. These analogs were created by modifying the molecule of human insulin, which changes the rate of absorption from the subcutaneous depot and the duration of action.

Types of insulin are usually classified according to the time of onset and the duration of action. However, these parameters differ depending on factors such as the location and technique of the injection, the amount of subcutaneous fat, and blood flow at the injection site.

Fast-acting insulins, including lispro and aspart, are absorbed rapidly, since the rearrangement of a pair of amino acids in insulin molecules prevents their association into dimers and polymers. These drugs often begin to reduce plasma glucose levels already in the first 15 minutes after the injection, but they act for a short time (<4 hours). Insulin is best taken during meals to prevent a rise in plasma glucose levels after meals. Inhaled simple insulin is a new, fast-acting insulin taken with meals.

The action of “classic” insulin is slightly slower at the beginning (from 30 to 60 minutes) but its duration is longer (from 6 to 8 hours). This is the only form of insulin for intravenous use.

Researchers from St. Louis (America) have discovered a new method for treating diabetes with stem cells.

In a two-week experiment in mice, rodents recovered from a severe disease form. The results were published in the journal Nature Biology.

It is noted that the new technique is based on the cultivation of pancreatic cells and stem cells. The transformed cells allowed the mice to quickly produce enough insulin to break down blood sugar, which causes diabetes. Tests showed that their sugar levels returned to normal.

The project manager, biomedical engineer Jeffrey Millman, said the mice had very severe diabetes with blood sugar readings of more than 500 mg per deciliter of blood – a level fatal to humans.

When we gave the mice insulin secreting cells for two weeks, their blood glucose levels returned to normal and remained so for many months.

The study said that pluripotent stem cells are, in fact, empty undifferentiated cells with the ability to grow into any other types of cells. That is, stem cells can be turned into insulin-producing cells that diabetics lack, helping them control their high blood sugar and stay healthy.

Scientists have been looking for a way to realize this for years. In 2016, a method was developed for the production of insulin-secreting cells obtained from patients with type 1 diabetes who respond to glucose. A few years later, they learned how to increase insulin secretion in pancreatic beta cells derived from stem cells.

The main problem when you try to transfer a human stem cell into an insulin-producing beta cell is that you also produce other cells that you are not intended to. In the case of beta cells, we can get other types of pancreatic or liver cells.

The new method has so far been tested only on animals. As the researchers emphasize, we are still far from using it to heal people.