Anti-CCP as a Marker of Rheumatoid Arthritis

Antibodies to the cyclic citrulline peptide, anti-CCP is a highly specific marker of rheumatoid arthritis. The detection of anti-CCP allows you to diagnose diseases in the early stages.

Rheumatoid arthritis (RA) is the most common chronic systemic disease of the connective tissue. This disease has an autoimmune nature, in which joints hurt, swell, lose mobility and become deformed. This disease is characterized by inflammation of the synovial membrane, which spreads symmetrically from small to large joints. Initial disease symptoms include painful swelling of the joints on the fingers with loss of joint flexibility in the morning. This disease can have extraarticular manifestations. Early diagnosis and the immediate initiation of appropriate therapy are critical to disease outcomes. 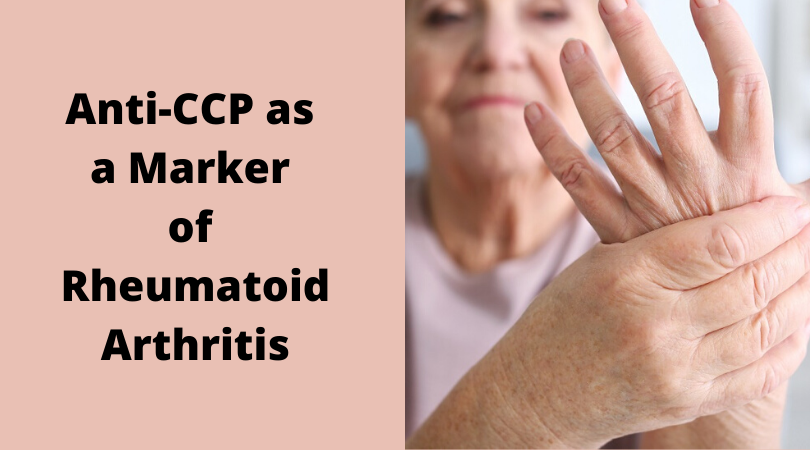 Anti-CCP belongs to anticytrulline antibodies. The description of citrulline-containing autoantigens characteristic of rheumatoid arthritis recently has become one of the most important discoveries of rheumatology in the field of serological diagnostics. Citrulline does not belong to the standard amino acids included in proteins during their synthesis, it is formed as a result of subsequent arginine modification. The process of citrulination is observed during natural physiological and pathological processes and plays a role in the processes of cell differentiation and apoptosis. Citrulline antigens were discovered in the process of searching for antigenic targets of anti-keratin antibodies, a specific marker of rheumatoid arthritis detected by immunofluorescence on tissue preparations.

Anti-keratin antibodies recognize only the citrulline forms of the filaggrin protein that is part of keratin. Among the possible inducers of antibodies’ formation to citrulline peptides in the mechanism of development of rheumatoid arthritis are considered citrulinated fibrin. It accumulates in large quantities in the inflamed synovial membrane. Citrulinated antigens of synovial tissues include citrulinated vimentin. During the development of methods for determining antibodies to citrulline antigens, it was shown that the use of synthetic cyclic forms of citrulline peptides provides greater test sensitivity compared to linear peptides. Antibodies to the cyclic citrulline peptide are currently recognized as an informative serological marker for rheumatoid arthritis.

Anti-CCPs are primarily IgG. Their specificity for RA is about 97%. They are found in the very early stages of the disease. Patients with antibodies to CCP suffer from more severe joint damage. Antibodies to CCP have a higher specificity. Anti-CCP can be detected in 30% of cases of seronegative rheumatoid arthritis (negative for rheumatoid factor).

Anti-CCP is useful in the early diagnosis of arthritis and in the prognosis of recently developed rheumatoid arthritis (Anti-CCP is more associated with progression and erosive arthritis than the rheumatoid factor). The use of these agents for monitoring the activity of the process is not recommended. Test results should be evaluated in conjunction with a history and clinical observations, including instrumental examination data.

It is recommended to take blood test in the morning, from 8 to 12 hours. It is done on an empty stomach or 4-6 hours after the meal. It is allowed to use water without gas and sugar. Food overload should be avoided.