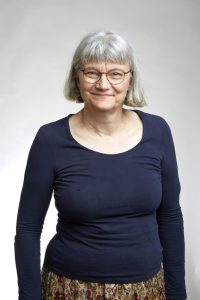 Cathie Martin (Catherine Rosemary Martin; born in April 1955) is a British botanist, cytologist, bioengineer, tomato culture specialist. She is a member of the Royal Society of London (2018), Ph.D. (1981), collaborator at the John Innes Center (since 1983) and professor at the University of East Anglia.

Cathie graduated with honors from Cambridge University of Natural Sciences (1977) and in the same place in 1981 received a Ph.D. in biochemistry, after which in 1981-1983. was a research fellow.

She studied with Beverley Glover.